How a Pochampally weaver’s son invented a machine to make life easier for his mother and won a Padma Shri in the process. 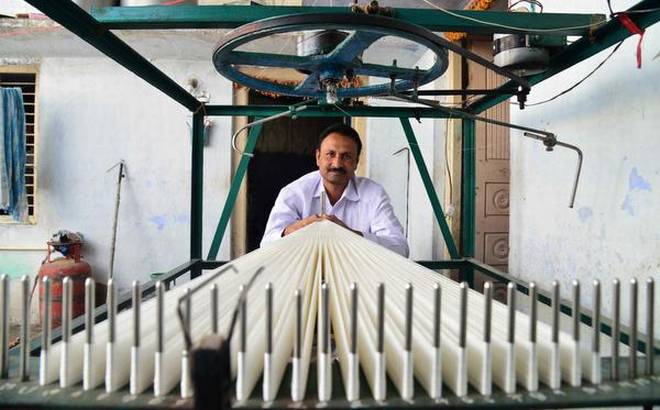 The Asu machine and its inventor Chintakindi Mallesham

As a young boy, Chintakindi Mallesham would watch as his mother Lakshmi, a handloom weaver, laboured for hours, winding metres of silk yarn on to a large frame — a process called asu that is integral to the creation of the exquisite Pochampally Ikat sari. In this often painful process, the weaver has to stretch her arms continuously to wind yarn around two sets of pegs on either end of a four-foot structure before the sari is woven. Lakshmi’s shoulders and elbows would ache from the repetitive work, and Mallesham, a Class VI dropout from Aler village in Telangana’s Yadadri district, made up his mind to ease his mother’s pain.

Now famous as the innovator of the ‘Asu machine’, which processes yarn mechanically, Mallesham, 42, was awarded the Padma Shri this Republic Day — but more than the award itself, he is grateful for the recognition it has brought to the weavers of the Pochampally Ikat tradition.

The Asu machine has indeed been creating quiet ripples over the last decade, applauded as an innovative indigenous device that has reduced the time taken to weave a Pochampally Ikat sari from about six hours to an hour and a half. It has revolutionised the productivity of handloom weavers in this district.

Mallesham’s story is one of extraordinary tenacity: it took seven years of trial and error, between 1992 and 1999, and one eureka moment before the young man, with no prior technical or engineering knowledge, came up with the Asu machine.

Processed yarn being dipped in colours using the tie and dye technique.

The young Mallesham, working alongside his mother, would keenly observe machines in rice mills and workshops in his village and try to work out how they could be adapted for the asu process.

“I figured that the Asu machine would need five components. I made three but then I hit a road block. I was taunted by my neighbours for wasting my time and my family’s resources,” he recalls. Refusing to give up on his dream, he decided to shift to Hyderabad to make a living.

Mallesham brought his incomplete Asu machine to Hyderabad — where he found a job as an electrician — and began to work on it again in all his spare time. On a chance visit to a workshop in Balanagar in Hyderabad, he saw a machine that gave him a vital clue. And in 1999, the device was ready. He took it back to his village, where he demonstrated it successfully.

The 250-watt Asu machine is 60 inches long, 40 inches wide and 50 inches high and powered by two motors. Over the years, Mallesham has improvised on the machine’s design and brought in electronic components. He learnt the basics of computer programming to automate some processes with the help of friends. The journey to upgrade the device was again arduous. Realising his limitations in education and English language skills, he looked around Koti’s book market in Hyderabad for the right text books and a dictionary to make sense of the terminology. 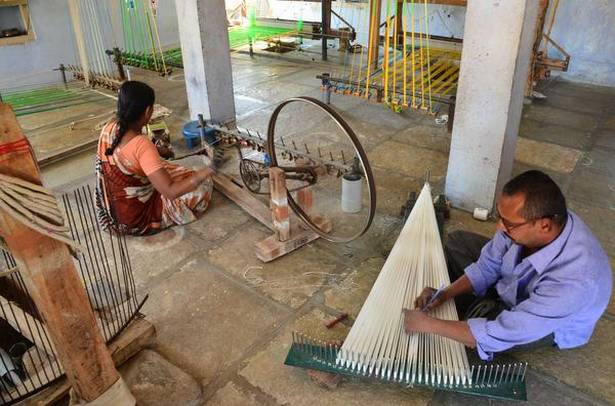 A weaver marking the processed yarn in line with the chosen design.

Mallesham has just one regret: his innovation has been available for 15 years now but there are at least 600 families in Nalgonda who still cannot afford the ₹25,000 machine and continue to struggle with the old labour-intensive process. He has so far supplied 850 machines, including 150 that were sold at 20 per cent of the cost because donors stepped in. His dream is to help all the weavers get one.

In the long list of people that Mallesham is grateful to for popularising the Asu machine is Brigadier Ganeshan, who promotes indigenous innovations from the grassroots. Ganeshan, who saw the machine at an innovations exhibition, promoted it at different platforms to much acclaim from weavers like Vanam Buchidasu. “But for this machine, I would have given up weaving and shifted to the city for work,” Buchidasu told Ganeshan.

The best part of an innovation like this is that it helps the younger generation of the weaving community to return to its vocation, now aided also by better designs, marketing and sales ideas.

Mallesham now has dreams for his two daughters: Swetha, who is studying textile engineering in Salem, and Rupa, who he hopes will study fashion designing. “With education, my daughters should be able to do much more for the handloom sector than me and in lesser time.”