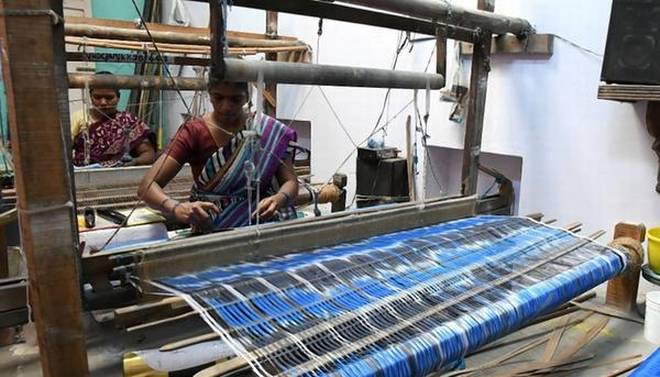 Self-reliant:Women SHG members are able to meet the growing demand for lungis.C. Venkatachalapathy

20 women from poor background have turned the corner

In four to five hours, S. Thenmozhi weaves a 2.5-m-long lungi. Hailing from a family of traditional weavers, she joined hands with 19 women, many of them unfamiliar with weaving, to make lungi weaving their source of livelihood in Gudiyatham. Together, they make at least 500 lungis a month.

The sound of the loom is what keeps their lives on the move. Belonging to families from below poverty line, the women turned to handloom weaving for a sustainable livelihood.

The 20 women, through Mahalir Thittam, formed a SHG, ‘Sigaram,’ nearly eight years ago and turned a member’s old-fashioned house on Pudhiya Balavinayagar Koil Street in Bhuvaneswaripettai into their place of work.

With six looms in the house, the women work on three shifts every day, with a clear division of their jobs. Taking up weaving was like treading an unknown path for many like G. Varalakshmi. “Many of us did not know weaving. By coming together, we learned the trade from our own members, who hailed from weaving families, and through training from Mahalir Thittam . We were able to get loans from banks,” she said.

One lungi is priced between Rs. 350 to Rs. 450 depending on the variety, she said, adding, “We have tied up with a cooperative society. They give us ‘paavu’ and procure the lungis from us. We also sell lungis to ‘mundy’ and other customers. We share the profit from sales equally among us and earn nearly Rs. 8,000 per month that includes wages and profit. We settled our debts, and have now reached a stage where we are able to save money. This is our lifeline now, and we have grown in confidence.”

For Ms. Thenmozhi, the hard-earned money is helping her family. “I am able to manage the household expenses and take care of the education of my two sons,”

The SHG has kept in line with the growing demands and changing preferences of customers. “We have adopted newer designs and colour combinations depending on the orders we receive. In fact, we are getting plenty of orders but are unable to meet them,” she added. Ms. Varalakshmi said that they get customers regularly from Bengaluru and the neighbouring districts of Tamil Nadu, and are also allotted stalls at various exhibitions.

Members of another SHG, ‘Senthamizh Women SHG’, that runs its unit on Nethaji Street in Pichanurpettai are happy with the journey that they have been through. With 20 members and 13 looms, each person weaves 24 to 32 lungis. “We make 600 lungis a month. The money we earn is helping us to save for the future of our children,” said S. Jayanthi, a member of the group.

A. R. Sivaraman, project director, Tamil Nadu Corporation for Development of Women, Vellore, said there are a number of SHGs in Gudiyatham, Arakkonam, Kaveripakkam and Nemili that have taken up lungi weaving for their livelihood.

“This has helped them in many ways, especially to improve their standard of living. The economic development has brought changes in their lives. Some of the SHGs supply lungis to big brands,” he said. They were preparing a proposal to form two or three district-level federations of the SHGs involved in lungi weaving so that they could get subsidies and loan from the Centre.