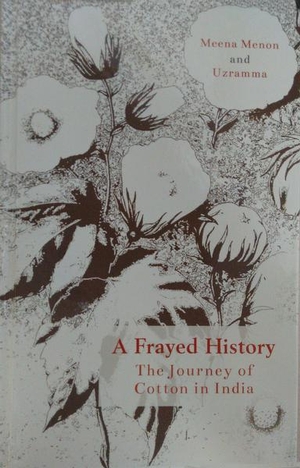 The book is about cotton as a commodity and artefact, and traces how cotton growers were exploited for generations in India. By LYLA BAVADAM

THE evocatively titled A Frayed History: The Journey of Cotton in India is not a scholarly thesis or treatise; it is an interestingly researched work put together by a journalist and an activist. The combined experiences and skills of Meena Menon and Uzramma, and the substantial documentation they have sifted through, add up to a very educative read. Replete with facts, figures, tables, boxes, references, maps and an extensive list of abbreviations, A Frayed History is both a study of cotton as a commodity of international trade and a natural fibre that was transformed into art, especially in the hands of the famed muslin weavers, as also a historical account of how cotton growers have been manipulated and destroyed for generations in India.

As the authors state at the outset: “Why is a book that speaks of both the growing and weaving of cotton in India relevant today?... From a lustrous past, the story of cotton today is riddled with contradictions. It competes with synthetic fibres and its still-active hand weavers are reduced to penury, while its growers… battle rising costs… and the spectre of suicide. Yet cotton is doing better than ever before—India was the largest producer of cotton in the world for the second successive year in 2016-17… but the number of farm suicides, topping the 3,00,000 mark in 2015 was a grim pointer to the continuing agrarian distress… a distress [that]… had its origins in colonialism.... The history of cotton from the colonial times to the present has a bloodstained selvedge.”

Both authors bring their vast expertise to the table. Uzramma, who has been associated with India’s artisanal cotton textile industry since 1989, is director of the Malkha Trust, an initiative that was set up in 2003 with the aim of bringing together all those engaged in cotton from “field to fabric”. Meena Menon, a former journalist, has written on sociopolitical issues, including the environment, development and politics.

The book documents the desolation of lives involved in cotton production right from the 18th century to the present. The first part of the book relates to the machinations of the East India Company, which effected major changes in the indigenous short and medium strains of Indian cotton so as to suit the spinning and weaving machines in Lancaster. The disastrous cycle that was set in motion as a result is well recorded. Rural Indian economies were plunged into chaos in the late 18th century as they were forced to grow more and more for the hungry English mills, and the fabric thus produced flooded Indian markets. Buoyed by their thriving trade, the company introduced the long staple American cotton in Indian fields and along with it the green American bollworm which “[drove] farmers across the country to the edge of madness”. The company’s grip on Indian cotton farmers was total.

The story of cotton is one of losses. The “six-yard high cotton trees” that Marco Polo talked of no longer exist. Neither do weavers weave “the finest and most beautiful cottons” that Edward Baines, an English journalist from the 1800s, had extolled in his history of cotton manufacturing. Nor do the cotton clothes, finer and whiter than flax, that an admiral of Alexander’s admired in 327 BCE, exist any longer.

However, there is one chapter that is the proverbial thread of hope. In her chapter, “The Malkha Story”, Uzramma matter-of-factly describes Malkha’s journey with all its hurdles of government bureaucracy, problems of a nascent young group of entrepreneurs and fervent debates for and against technology in the handloom industry. At one point, when much of their struggle was behind them, she writes: “At last, we had Malkha fabric! There was still a long way to go, but for now just to feel and hold the first cloth made in this way was exhilarating. It was proof that the whole field-to-fabric chain of cotton-cloth making on a small scale in villages near cotton fields was an idea that could work.” This in-depth case study is living proof that although the history of cotton in India is frayed, the product can survive in a competitive market.