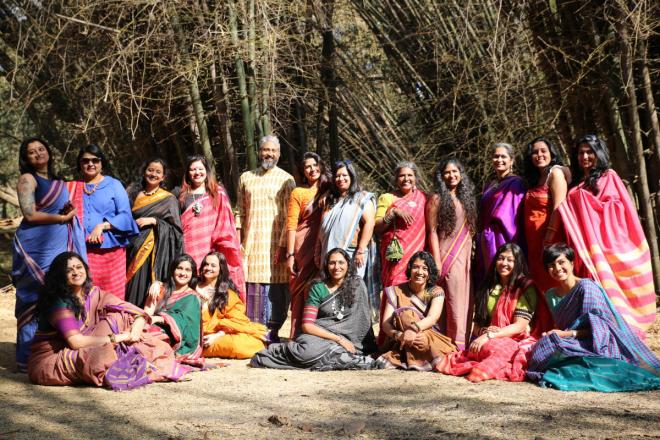 About 25 women wore their handloom best and did a photoshoot at Cubbon Park recently as part of their efforts to popularise the versatile fabric.

Members of the Facebook group 'Kai Thari', these handloom lovers have come forward to promote the weavers in Udupi and Goan Kunbi saris.

The event was organised by Anu Naveen, a designer who is passionate about handlooms and owns 'Marmalade Sky'. However, the initiative was initially started by artiste Bakula, who was moved by the plight of the weavers in her hometown of Udupi.

Anu explains, "She saw the weavers had kept the saris in a room and sold them only for Rs 100. It took them about three to four days to make it, but there was no one to purchase from them as many thought that the designs were old fashioned."

So when Bakula returned to Bengaluru and narrated her experience on her social media, handloom lovers in the group immediately took interest and placed orders for these saris.

The concept became so popular that people from around the world started ordering the saris, causing the weavers to be booked till Deepavali.

Savita Suri, a member of the group, takes care of the logistics. "The need for handloom saris still continues but we want to talk more about it and popularise it," says Anu.

About 25 women and one man took the trouble to wake up on Sunday morning and strike a pose. Soumya Gopi, a food blogger who was part of the event, says, "I hate morning events but I'm glad I was a part of this one. Whenever I wear a sari, the first thing that comes to my mind is my mother. I have never seen her wear anything other than a sari. When she was working, she carefully handpicked saris to wear for any occasion. She was my inspiration."

It was a Priyadarshan movie called 'Kanchivaram', which was played at Bangalore International Film Festival, that drew her closer to handlooms.

"I started collecting saris from different regions from then onwards. But this event was an eye-opener," Soumya wrote on her Facebook account.

Bringing these handloom lovers together near to Women's Day seemed just perfect.

Anu says, "As I designer, I believe that handlooms are playing a major role in one's daily wear. Women wear the sari with crop tops, a good shirt and even jackets. The mix and match phenomenon is trending now. You'll even see women wearing saris to a pub. And handloom is a very comfortable fabric to carry around."
She adds that using handloom to stitch kaftan tops is also in vogue now. "It's important to make it more youngster-friendly. So using the fabric in different forms is something everyone is experimenting with now. Our idea is to make sure that the demand doesn't diminish and we continue to help the weavers in the best way we can," she adds.